The only recorded visit of the apostle Paul to Crete was when his ship was detained there some time on his journey to Rome (Ac.27:7-12). The writer of the Acts was with the apostle, and doubtless others, as Demas and Crescens, accompanied him, including, it would seem, Titus, as far as Crete. Paul's direction that he should leave the island and meet him in Nicopolis (3:12) seems to confirm this, for, later, Paul writes to Timothy that Titus had gone to Dalmatia (2 Tim.4:10). There was a Nicopolis on the Adriatic near the boundary of Macedonia and Dalmatia. Hence this letter was probably written from Rome not long after his arrival. His early intention to visit Spain (Rom.15:24), and his decision to winter in Nicopolis (3:12), seems to have failed of fruition, for he is still in Rome when he informs Timothy of his imminent dissolution (2Tim.4:6).

The evident purport of the epistle is hortatory. It deals with the practical duties of life. No doctrine is developed. As shown by the literary framework [omitted], the chief subjects are the appointment of elders who are to serve as supervisors, and the conduct of those who are slaves. The paragraph dealing with elders is logically followed by one describing their duties and difficulties due to the insubjection of some. The section on slaves is fittingly followed by one on subjection, for even those who are not in physical bondage owe subjection to the government and to their fellow men.

The central subject sets forth the ideal character of men and women, old and young. 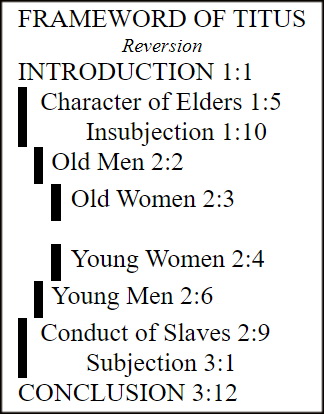 1 Paul writes this letter in the character of a slave. This shows that the epistle deals with service. He adds the title apostle, to give weight to his injunctions.

2 Eonian life, usually called "everlasting" life, is here put, as is usual in Paul's epistles, as a future expectation, God promised it before the times of the "evers" or eons and it will last until the eons come to an end (Heb.9:26).

4 Titus is not mentioned in the narrative of the Acts, doubtless because his case and ministry were not at all in line with the subject of that treatise. Only that aspect of Paul's work is there touched upon which was in subjection to the Circumcision and connected with the proclamation of the kingdom to Israel. Titus was a Greek whom Paul refused to circumcise, so that he might be a standing reminder of the fact that circumcision was not a part of his evangel for the nations (Gal.2:1-5).

5 The island of Crete is also named Candia. It is the most fertile island in the Mediterranean.

6 The elder and supervisor seem to be different aspects of the same office. The name elder was given in recognition of their age and dignity. The term supervisor describes the character of their service. His relations with the world and his own family must be such as will not compromise the ecclesia which he serves. His name in the world must be above reproach, his domestic relations must be ideal. Men with many wives were not eligible.

10 It was very natural for the Circumcisionists to arrogate to themselves the supervision of the ecclesias to which they belonged, but they were often unfit for the office.

11 In the very early days impostors set themselves to use devious means for securing their own advantage and getting dishonest gain. This is a most destructive plague in teachers, for, as soon as they make wealth their object of pursuit, they necessarily endeavor to be popular and obtain the favor and support of the people. This is almost sure to be followed by corruption in teaching.

12 It is supposed that this is a quotation from Epimenides, a poet and philosopher who lived about six hundred years before Christ. It was common to give the Cretans a bad name, for to "Cretanize" was the equivalent of lying and deception. Paul adds his confirmation in order to aid them in guarding against these grave defects in the national character.

14 The Jewish doctors have so covered the law with their myths and traditions that little, if any, of the law is left. Ceremonial uncleanness is a constant menace to the orthodox Hebrew. So much is unclean that their consciences and minds are contaminated. This is entirely out of tune with the grace which has come to those who are themselves ceremonially unclean, yet have been subjects of God's cleansing grace. A true knowledge of God's grace acknowledges, as Peter did, that what God has cleansed is not to be called unclean (Ac.10:14).

15 True cleanliness is an inward condition which views all without from its own standpoint. A defiled mind and conscience will defile even that which is, in itself, clean.

1 The apostle segregates the ecclesia into young and old, men and women, and gives to each the appropriate exhortation. All are entreated to be sane (2,5,6). The usage of this word in the Greek corresponds very closely with its English equivalent. In Mk.5:15 and Lu.8:35 it is used of those who had been insane. Here and elsewhere it is used of mental soundness and good judgment. We say .'Adversary" where the A V has "devil." The plural (3; 1Tim.3:11; 2Tim.3:3) is "adversaries" rather than "false accusers" or slanderers" (A V). (The A V term "devils" stands for another Greek word which we transliterate demons).

9 Slaves are given the privilege of adorning the teaching, by their good behavior.

11 The saving grace of God, properly appreciated, has no equal as a means for training God's saints to live ac-

ceptably in His sight even in the midst of the abounding evil of this eon. It softens the heart, and attracts the will, and provides the power for putting its precepts into practice. The law was not so. Its demands withered the arm that would fulfill it. In some measure God's grace enables us to anticipate the overwhelming bliss which will be brought to us at His glorious advent, which will mark the end of sin and suffering for His saints.

14 The ransom of Christ has a present power. Lawlessness is that basic conception of sin in which it is viewed as a departure from the normal and natural course of things. The ransom Of Christ will eventually restore us into that ideal condition which conformity to the laws of the universe produces. At present this takes the form of zeal for good deeds.

1 The place of the believer is one of subjection in this eon. It is not our time to reign (1 Cor.48). That will come in the next eon. The path of the saints is not at all aggressive. It is not for them to redress wrongs, but to yield to injustice, not to speak evil of others even if they justly deserve it, not to stir up trouble, but to be pacific, making allowance for the failure of others, meekly enduring what would naturally inflame our indignation.

3 The emphatic we, repeated in the fifth verse, suggests that the apostle is now referring to himself as one of the Circumcision–those who, indeed, ought to have kept the law and who thought that their salvation depended on their righteousness, but who needed to be regenerated and renewed by the holy Spirit, as the Lord taught Nicodemus (Jn.3:5), according to His mercy.

5 The Septuagint uses this word loutron twice for a bath in the Song of Solomon (4:2, 6:6), but renders laver by another form, louter, in all of its occurrences. Hence it is evident that here it is not the instrument which contained the water, but the element itself which is a figure of renascence. Though literally regeneration, the word is always used in a much looser sense of any renewal, much like our word renascence.

9 It would seem that by far the largest share of the difficulties of the early ecclesias was introduced by the Circumcision–the very ones who ought to have been a help instead of a hindrance. The record of the book of Acts is full of their opposition to the evangel and they were directly responsible for Paul's imprisonment in Rome. Pharisees who believed were the source of continual turmoil. They could not clear themselves of the trammels of Judaism. They could not rise to the new revelation vouchsafed to Paul. With their genealogies, and circumcision, and contentions about the law, they were continually drawing the saints from the ground of grace and faith down to law and works. Finally the apostle put a stop to the discussion of these subjects.

10 Though this is the Greek hairetikon, it does not refer to a heretic, but one who belongs to a sect. It is applied to the Sadducees (Ac.5:17), the Pharisees (Ac.15:5, 26:5), and the Nazarenes (Ac.2:45). These could not all be called heretics. Sectarianism is essentially preferring to associate with a class or clique. The Circumcisionists would readily prefer their kind.

12 Tychicus was later sent to Ephesus (2Tim.4:12). As he delivered the letter to the Ephesians (Eph.6:21), it appears that this letter to Titus was written some time before the Perfection epistles. Titus seems to have gone to Nicopolis, but Paul remained in Rome.