This, the only private, personal letter from the pen of the apostle Paul, is a perfect specimen of its kind. Its powerful yet pathetic appeal is the ripe fruitage of that overwhelming grace which Paul dispensed from his Roman prison. Himself a prisoner, he captures the runaway slave and gives him the freedom of Christ, yet sends him back to the master from whom he had escaped.

This note was doubtless written at the same time as the epistles to the Colossians and Ephesians. Onesimus accompanied Tychicus (Eph.6:21) to Ephesus and Colosse (Col 4:7-9). From the fact that Onesimus is spoken of as "one of you" (Col.4:9), we may infer that Philemon belonged to the ecclesia at Colosse, and that he was given the message to masters in that epistle at the same time (Col.4:1). But this precious little letter goes far beyond what is "just and equal" so far as Onesimus is concerned. No picture of God's grace can better this. Not only a slave, but subject to torture and death for stealing from his master, he is first reconciled to God through Paul's preaching, and then is reconciled to his master through Paul's pleading. He is caught upon the very crest of the great tidal wave of grace which was just then ready to overflow the whole world. The transcendent grace of Paul's perfection epistles was doubtless his precious possession even before it was delivered to Philemon. Can we realize what this, must have meant to him? To be taken from the deepest depths of social degradation and to be seated with Christ in the celestial realms, by faith, almost exhausts the possibilities of grace. And now upon all this, he is given this precious passport to his master's heart! Is it not a lovely little letter?

In literary form, too, it is a perfect example of a simple reversion. Every topic is repeated in reverse order, as set forth in detail in the following literary analysis. 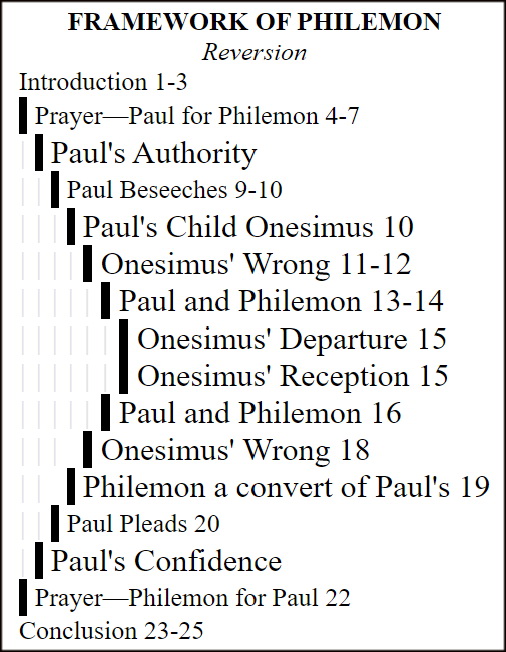 4 The name Philemon means "fond". He seems to have been a most exemplary character, whose reputation had reached Paul's ears, and had given him joy in the midst of the sorrows and dangers of his situation in Rome. But Paul is not thinking of himself but of the service Philemon renders to the saints.

8 Paul's apostolic authority gives him the right to dictate to Philemon regarding Onesimus. It would have been perfectly proper to have held the run away slave for his own comfort and service without consulting his master in the matter. Yet grace does not demand its rights, or stand upon its privileges, but, led by love, entreats. What a glorious sunset to such a life as Paul's! The rare graces of the gospel glow in the aged apostle and prisoner with greater splendor than ever before. Age has not soured but rather mellowed him.

11 There is a pleasing play upon the name "Onesimus", which means profitable. Paul uses it as a verb in verse twenty. He may be regarded as a picture of those of the nations who had strayed away from God, who are the fruit of Paul's bonds as Onesimus was, and who now return to God to become His "profitable" slaves. He is also a marvelous example of God's method of tranforming evil into good. No one would condone the act of Onesimus in running away from his master, yet God made it a blessing not only to Onesimus, but to his master and to Paul. All were enriched by it.

In this way He is able to make all evil subserve His purpose. It is the background of His grace and will become the means of drawing His creatures infinitely closer to Himself and His affections than would be possible if sin had never invaded the universe.

15 Collect as a repayment, from-have, is a special term used in the papyri for receiving in full for any debt or obligation. Thus the Lord, in the sixth of Matthew, said concerning those whose deeds were done before men, that "they are collecting their wages," i.e. they have their reward and the receipt for it in full–there is no more due them from God.

18 Philemon was evidently called under Paul's preaching, so that he owed all he had in grace to his ministry. With all this to his credit, Paul may well assume all of Onesimus' debts to his master.

20 There is a play on the name Onesimus, or Profitable. If he should be sent back to Paul, to serve him in the evangel, he would indeed be "Profitable" to Paul, both in name and in fact.

22 At this time Paul still hoped to be released and return to his itinerant ministry. But the very spiritual character of his latest ministry did not demand his physical presence. It was more in keeping to convey it by epistles. We have no evidence to show that he ever went to Colosse.

23 Later, all except Luke left him (2Ti .4:1l ). Demas abandoned him. And to this very day his inspired epistles, by means of which he still speaks, and which are the only source of the truth for this economy of God's grace, are often unheeded, neglected, abandoned, forsaken.