Pauls Epistles are for the present. All the rest of Scripture finds its interpretation and application either before or after the present secret administration. Paul alone gives the truth for the ecclesia which is the body of Christ. This is found nowhere outside of his writings. Israel and the nations occupy all other parts of divine revelation. What is true of them in other eras and eons must not be mixed with the present truth or it will lead to confusion and error. All Scripture is profitable, as a revelation of God's ways, but it must not be applied outside its proper place.

The main subject of the Greek Scriptures is the kingdom of Israel. It is refused in the four accounts of our Lord's ministry, it is again rejected In the treatise called Acts, It is reaffirmed in Hebrews, James, Peter, John, and Jude, and it is realized in the Unveiling. In Paul's epistles it is in abeyance.

It is God's purpose to bless the nations through Israel. But when Israel, the channel of blessing, fails, this becomes impossible. In Paul's epistles the nations are blessed during Israel's defection. The sphere of blessing is changed from earth to heaven. Repentance and pardon are replaced by justification and reconciliation. Grace replaces mercy.

The scope of Paul's epistles, both in time and In space, far transcends all the rest of revelation. He is not confined to the earth, but includes the whole universe in God's grand climax of reconciliation (Col.1:20). He is not confined to the eons, or ages, but reveals a purpose formed before they began, and not concluded until after their consummation. His range reaches from a time long anterior to the first of Genesis to a period long past the final vision of the Unveiling.

Paul's writings naturally fall into two divisions, his epistles to the ecclesias, and his personal letters to Timothy, Titus and Philemon. Paul wrote nine epistles to seven ecclesias. They arrange themselves into three groups. The epistles in each group are very closely related, the first epistle in each, Romans, Ephesians and 1 Thessalonians, setting forth the truth didactically, while the other epistles of the same group are explanatory and corrective. The best commentaries on Romans are Corinthians and Galatians; on Ephesians, Philippians and Colossians; and Second Thessalonians supplements the first epistle.

The Thessalonian group we have called the Promise Epistles, because they deal with the expectation of our Lord's return. The Romans group we have named the Preparatory Epistles because they deal with the transitional era which prepared the saints for the final revelation found in the Ephesian group, which we therefore style the Perfection Epistles.

Each group is characterized by one of the abiding trinity of graces, faith, expectation and love (lCo.13:13). The following outline will serve to show the groups and the relation each epistle sustains to the others in its group. 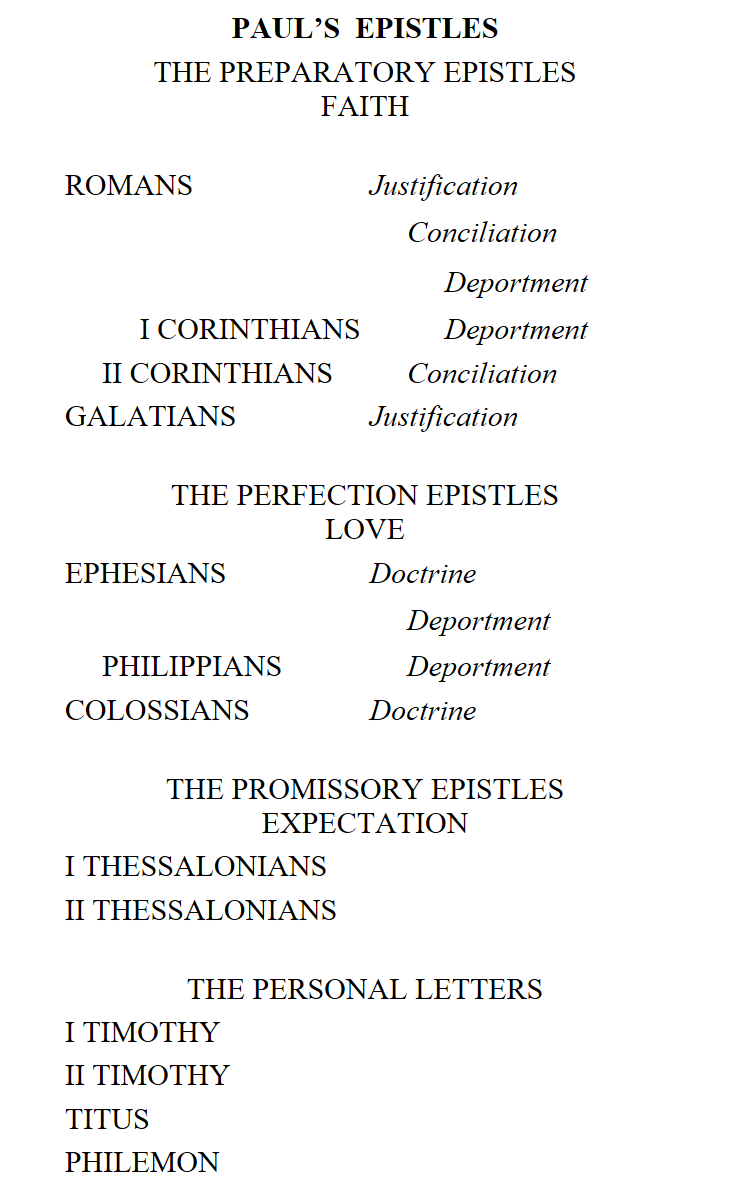 This publication may be reproduced for personal use (all other rights reserved by copyright holder).