As Jude speaks of the apostles (17), he is not the apostle of this name (Jn.14:22). Neither was James, his brother, an apostle, for James and John were the two sons of Zebedee (Mt.26:37). The other James was not prominent enough to be referred to in this way. So Jude was evidently the brother of James, the Lord's brother, who occupied by far the most prominent place among the saints of the Circumcision, although he was not an apostle. This makes Jude himself a brother of the Lord.

This fact throws much light on the character of its teaching, its harmony with the other Circumcision epistles, and its strong contrast with the later teaching of the apostle Paul. Paul repudiates even the distant physical bond existing between him and the Lord, and bases all on a spiritual relationship in grace. Jude deals with the judgment of those who are closely united to Him in the flesh.

While the apostasy here set forth is not to be applied to the Uncircumcision during the present period of grace, its beginnings can be clearly seen among the Jews, as God is gathering them from the nations and restoring them to their own land. As in the exodus from Egypt, He will deal with the nation of Israel as a whole, yet destroy the apostates among them during the era of His indignation. With this in view, Jude addresses this epistle to the faithful, lest they, too, become involved in the apostasy.

Unlike those to whom Paul writes these will not have justification, but only a pardon of sins, which can be revoked. Hence even believers among the Circumcision may fall away, especially during the fearful affiictions of the time of the end.

The framework shows that the main theme, the judgment of apostasy, is presented, as usual, from the divine side first and then reviewed, in inverse order, from the human aspect.

From verse fifteen, as shown by the framework, we return over the same ground as we came, but from a different viewpoint. In the former division all was viewed in its Godward aspect: then we look on the manward side. First we have the mercy from God (2), lastly the mercy shown to man (21-28). And so with each subject.

The closing ascription is in close harmony with the epistle. Glory, majesty, might and authority belong to God when He is executing His strange work of judging the earth and inaugurating the reign of His Christ, as is set forth in detail in the book of His unveiling. 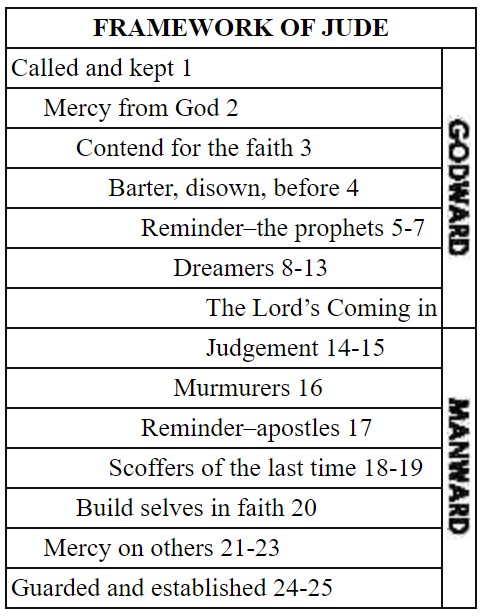 1 Jude's stress on human relationships is very strong, especially as James, his brother, gained the ascendancy among the Circumcision because of his physical relationship to the Lord. Even Peter and John were eclipsed by James, in the latter part of Acts, though he was not even an apostle.

2 The absence of grace from this salutation is very striking. As it will have its prime fulfillment in an era of divine indignation, nothing higher than mercy is possible.

3 This faith, once given over to the saints, is the evangel of the Circumcision (Ga.2:7) which was entrusted to Peter and the twelve apostles. It is radically distinct from the evangel of the Uncircumcision, entrusted to Paul. The error of the present day, of mixing their mercy into the present grace, will have its counterpart when they seek to mingle our grace with their mercy. Then the usual objection to grace will be fulfilled, for, being out of place, it will degenerate into a license to do evil, and lead to insubordination. Now, the transcendent grace of God is the most powerful incentive to a godly life; then it will be an excuse for lax morals. Misplaced truth is mighty error.

5 The present day decadence of morals and contempt for government is but an index of the trend of the apostasy in Israel in the last days. As in the exodus, where all Israel was redeemed out of Egypt, yet nearly all bleached their bones in the wilderness, so it will be again. Only a remnant will enter the kingdom, for lack of faith and following the flesh.

6 These messengers are probably those four who are bound at the great river Euphrates. At the sounding of the sixth trumpet they are loosed that they should be killing a third of mankind (cf page 392 14).

7 The destruction of Sodom and the surrounding cities is still apparent to all who visit the region. In this way these cities are experiencing the justice of eonian fire. The fire has long ceased but its effects will remain and testify to God's judgment until the close of this eon, after which Sodom shall return to her former estate (Ezek.16:53-56) .

11 The way of Cain is the bloodless religion which offers the fruit of its own cursed toil (Gen.4:3, 3:17), yet, for all its abhorrence of sacrifice, does not hesitate to shed fraternal blood. They will work for God's favor, but will not debase themselves so as to receive it as His gift, through the blood of His Anointed.

11 The temptation to profit by the priestly or prophetic office seems to be the ruling principle of all religions. Balak, when he wished Israel cursed (Nu.22:17), was told by Balaam that he would require great wages for the work. So the religion of the end time will be a popular vocation, affording a good opportunity for money making.

11 The lawless assumption of sacred functions on the part of those not qualified drew down God's judgment on Korah and his company in the wilderness (Nu.16). They were swallowed up alive by the earth for their presumption (Nu.16:32). The terrible time of Jacob's trouble will gather all these festering evils together in the day of His indignation.

14 The designation of Enoch as the seventh from Adam (Gen.5:18) is significant of the end of the first cycle of human history and corresponds with the seven earthly economies which precede the judgment. These are, Adam in Innocence, Seth with Conscience, Noah with human Government, Abraham with Promise, Moses with Law, the Incarnation (the Pentecostal, Transitional and Secret economies are parenthetic) and the day of Indignation. After this an entirely new cycle of human history commences under the reign of the Son of Mankind.

14 The statement that Enoch "prophesies" is indefinite as to time. It does not necessarily recognize the so-called "Book of Enoch" which has been found in an Ethiopic translation, and contains a passage substantially the same as the one given by Jude. The indefinite form of the verb allows the possibility that Enoch, as one of the two witnesses (Un.11:3) may yet deliver this prophecy to the irreverent in the great crisis at the time of the end.

14 The following quotations from an English translation of the Book of Enoch are notable: "I, as the seventh, am born in the first heptad, while justice and judgment were delayed" (93:3). This is true of the period from Adam to Messiah. Another passage confirms this: "In the seventh heptad there shall arise an apostate generation" (60:8).

18 Peter (2Pe.3:1-4) tells us of the scoffers and their scoffing. It all culminates in the challenge, "Where is the promise of His presence?" Since Adam hid himself in the garden, man's chief desire seems to be to get rid of the divine presence.

20 This faith, as in the beginning of the epistle, is the evangel of the Circumcision. The very wording of the exhortation shows that it is not for those who know the depths and heights of grace revealed for us. "Building yourselves up" and "keep yourselves in the love of God" is foreign to the phraseology of unforced favor which is ours in Christ Jesus. We do not anticipate the "mercy" of Jesus Christ at His coming but the transcendent riches of glorious grace at His presence.