This second letter to the Thessalonians is a sequel to the first. The Thessalonians are still unable to distinguish between the rage of man and the wrath of God. Their continued trial and persecution leads them to conclude that God is against them instead of for them. The kingdom of God, which was proclaimed among them, is to be introduced with divine judgments. The day of the Lord, in which it will be set up, opens with an unparalleled display of divine indignation. They still persist in imagining that this day had begun, especially as, in some way, this was represented to be the apostle's teaching (2:2).

In reply Paul and his fellow workers define these dreaded judgments as those which fall only on those being unacquainted with God and who do not obey the evangel, especially on such as their persecutors. Their main argument is founded on the teaching of the first epistle in reference to the Lord's presence and our assembling with Him in the air. There they had been definitely taught that this must occur before the day of His indignation.

The secret phase of lawlessness has been in operation throughout this economy, but its full development has been held in check by the presence of the saints. When we are taken out of the midst, then, and not till then, will the apostasy bear its bitter fruit. Its presence will be indicated by the presence of the man of lawlessness, corresponding to the head of the wild beast of the Unveiling of Jesus Christ (Un.13:1) who will be seconded by the false prophet who does signs and miracles to prove his claims (Un.13:11). By these mankind is deluded to its destruction.

But the Thessalonians are not deceived by God but preferred for salvation and belief of the truth and the glory of the Lord Jesus Christ.

The latter part of the epistle is devoted to some practical disorders, especially busybodies who do not work for their living.

The literary framework is a simple alternation within the salutations. A thanksgiving, a prayer, and an admonition are found in this order in both the former and latter half of the letter. If the epistle is read with its leading thought in mind–that we are delivered from the coming divine indignation–it will be seen to give it color and warmth everywhere, and especially in the assurances of God's mind toward them in their trials. 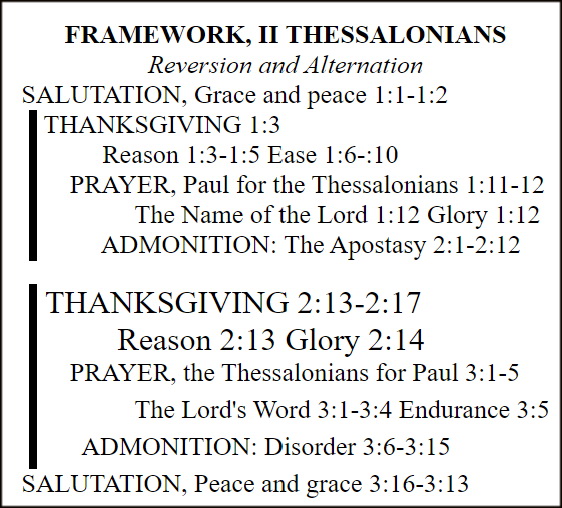 1 While Silvanus and Timothy are associated with Paul in this salutation, the epistle is practically by Paul himself and its genuineness is attested at the close by Paul's own signature (3:17 ).

3 The sufferings which were distressing the Thessalonians were the occasion of joy and boasting on the part of the apostle, for it proved the reality of their faith in Christ and developed their affection for one another. He adroitly turns their mistaken idea, that God is afflicting them, into the opposite, that their very sufferings are a sure index that those who afflict them will suffer at His hands. He lays due stress on the fact that God's indignation comes upon those who do not know Him and who do not obey the evangel. By thus turning the minds of the Thessalonians to the future he consoles them in their present trials. Then the opposers will suffer, not only for their sins, but for their persecution of God's saints, while those who are now in distress will enjoy ease and relaxation during the unveiling of the Lord Jesus from heaven. This passage alone should restrain us from including the saints of this economy in any of the companies of the saved mentioned in the scroll of His Unveiling. The persistence with which this thought clung to the Thessalonians is accounted for by the fact that the Circumcision did expect to go through the terrors of that day. Those who endured to the end would be saved. Paul was introducing a new and unknown doctrine, corresponding to his evangel for the nations, in which God's unadulterated grace is far more pronounced than in the gospel of the kingdom as proclaimed by the other apostles.

12 His prayer for them was that they might respond to this grace of God by a present conduct, in the midst of suffering, which would glorify God and His Christ.

1 The controlling thought in this section of the epistle is based on the teaching of the first letter. Had they fully accepted and understood what he had already written to them they never would have been led to believe that the day of the Lord was already present. In the meantime it seems that Paul has been misrepresented in this matter, perhaps by a forged letter (3:17). He now gives two of the salient signs which will be present when the day of the Lord comes: the apostasy and the man of lawlessness. Neither of these was present at that time.

3 The man of lawlessness (as the two best manuscripts name him) seems to correspond closely with the head of the wild beast (Un.13:1-8). The whole earth will worship him except the few whose names are written in the Lamb's scroll of life. It is evident from this passage that, at the time of the end, there will be a temple of God. That this should be elsewhere than Jerusalem seems impossible. So we may look, not only for a return of the Jews to their own land, but also for a restoration of their ancient ritual and a rebuilding of their temple. For anyone except a priest to enter the holy place is itself a terrible desecration, but for any man to usurp Jehovah's place in the holy of holies and demonstrate his own divinity is the most awful and appalling crime of which a human being is capable. This leads to the desolating abomination of Daniel 9:27, which probably consists in placing the image of the wild beast (Un.13:14) in the holy place of the temple. Our Lord warns those living in Judea to flee to the mountains (Mt.24:15-22), for them the great affliction (which alarmed the Thessalonians) would come.

7 The influences which will bring about the great apostasy of the end time have been at work from the beginning, but have been restrained by another, counteracting force. What is this? Some have supposed it to be the Spirit of God. But the Spirit of God will continue to work throughout the apostasy, enabling a few to endure to the end, and empowering

others to be faithful unto death. It has been suggested that Satan "holds fast" his place in the celestial spheres, for when he is cast out the apostasy commences. His ejection does mark the crisis between the secret and open manifestation of the apostasy, but that which is restrained is evidently the apostasy, not a place in the celestial realms. The apostasy is restrained by the presence of the saints. When we are taken out of the midst by our assembling with Christ in the air, then the apostasy and all its terrible train of afflictions will deluge the earth with fire. Thus the apostle proves that their own presence on earth is conclusive evidence that they were not enduring the afflictions of the Lord's day.

9 Nothing is more necessary in these declining days of this dispensation than to warn the saints of the danger of being deceived, not by that which appears evil, but by that which has all the outward evidences of good. Satan is transformed into a messenger of light and his servants are servants of righteousness (2Co.11:14-15). But, for the next era, God has warned of the deception. The false prophet will do the very signs which, in Elijah's day, proved the deity of Jehovah (lKi.18:24; Un.15:13), and he is empowered even to give a spirit to the image of the wild beast (Un.13:15) so that it will actually speak. Thus will the man of lawlessness demonstrate his divinity.

13 The Thessalonian saints (and all who believe in Christ) need have no fear of the terrible trial which is coming on the earth, for God has not sent them a deception, to condemn them, but prefers them for salvation through belief of the truth and for the procuring of the glory of our Lord Jesus Christ. What a glorious contrast!

1 Paul desired their prayers that he might lead others into the blessed position which they occupied.

5 The appreciation of God's love would destroy the idea that He was pouring out His indignation upon them. The contemplation of the endurance of Christ would help them to endure.

6 Discipline was necessary even in such a warm-hearted, zealous ecclesia as Thessalonica. The occasion was not doing wrong but doing nothing. Just as the grace of God provides for our salvation from all trial and all affliction in the future, but brings both in the present, so it will also bring rest and relaxation in that day but calls for toil and labor until then. We should not shirk our work. He who does not work has no right to eat. And if anyone goes about as a busybody, seeking his food from his friends, we should avoid him, yet treat him with all the grace necessary to correct his disorderly conduct.

7 "Thou shalt not muzzle the ox that treadeth out the corn" is the divine law for God's servants. They have a right to require support, for the Lord has appointed that those who are proclaiming the evangel should live of the evangel. But Paul did not use this right, but availed himself of the higher privilege of making the evangel absolutely free (1Cor.9:1-19). He pursued the same course in Corinth and doubtless wrote this letter in an interval between evangelistic labors and tent making, for he worked with Aquila and Priscilla at that trade (Ac.8:1-3). Thus he was able to point to his own conduct as a model for the disorderly. The power of such an argument is apparent.

16 In closing Paul once more tenderly touches the theme of the epistle. Their Saviour is "the Lord of peace" and He will never visit them in judgment but give them peace through all their trials by all the means at His disposal.

17 It is evident that the apostle did not pen his own epistles. To avoid forgery, however, he wrote the greeting himself and, in this case, signed his own name (2:2).