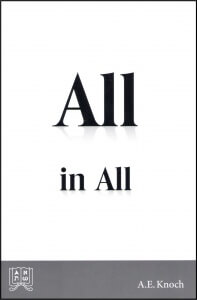 Description of "All in All" by A.E. Knoch Expand

The blood of Christ is the basis of all blessing. The purpose of God determines human destiny. It does not depend on our deserts. The plan or process of God during the eons or ages must be distinguished from His purpose, which will not be fully accomplished until the eons are past. Herein lies the difference between teaching of the Scriptures and the accepted creeds of Christendom. Sin and suffering, condemnation and death, endure for the eons, not "forever."

Yet indeed, the Bible is confidently appealed to to support three entirely different views of God's ultimate goal for the creatures of His hand and heart. Almost all agree in the main that the believer, who trusts alone in the blood of Christ, is certain of lasting bliss. But those who do not believe—what is their destiny? Many insist that they will be tormented forever, others say that they will cease to exist, while some believe that they also will eventually be saved. All bring forward texts from the Bible. In each class are earnest, consecrated Christians who desire to know the truth and to live it out.

If it were to be decided by a majority vote, eternal torment would be true. But the Scriptures speak of the present as a time of apostasy, so that the majority are more likely to be wrong. If it were left to history, the early Greek fathers seem to have held mostly to annihilation of the wicked or the salvation of all, and they used the language of inspiration and were nearer to its source than we are. But the only satisfactory way is to base our faith directly on the inspired Word of God. We must test and see what support it gives to each of these teachings.

Only one gift per person or household, sent postpaid. All fields must be completed. No quantity shipments to any group or organization.

We will never share your personal information. We will not put you on our mailing list unless you request that we do so. An Order Blank will be included with your gift, in case you want to request additional literature. If you have questions or comments regarding this offer, please send them to: gratis@concordant.org . Concordant Publishing Concern reserves the right to end this offer at any time.

If you live outside of the United States, All in All is available in digital form for free, as is most all of our literature.  Please go to our "Free Media" dropdown menu, then click on "Other Publications."

ALWAYS ships separately from any other order placed! Expand

The free gift program is available as a result of a generous donation specifically for this purpose.  It is shipped separately, and from a different location, from any order that may have been placed to Concordant Publishing Concern.